Literary Arts at UGA: A Showcase 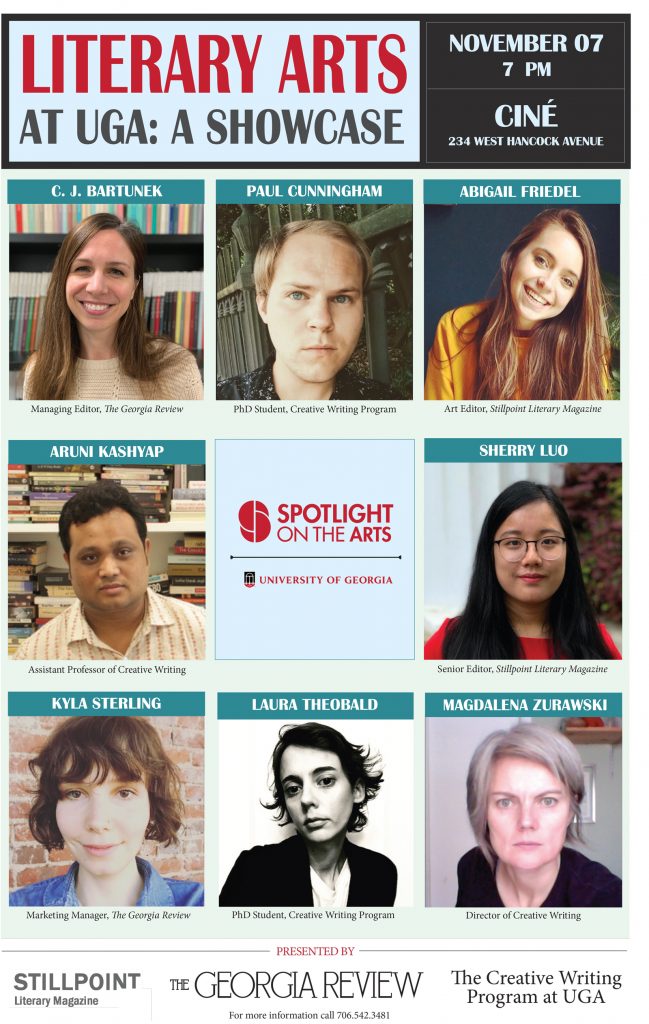 The Georgia Review, UGA’s Creative Writing Program, and Stillpoint Literary Magazine are pleased to present Literary Arts at UGA: A Showcase. This event will take place during UGA’s Spotlight on the Arts and feature readings by members of all three organizations. Free and open to the public, it will be held at Ciné on Thursday, November 7, at 7:00 p.m. Copies of The Georgia Review, Stillpoint Literary Magazine, and the readers’ books will be available.

Paul Cunningham, a current PhD candidate in creative writing, is from Pittsburgh, Pennsylvania. He is the translator from the Swedish of Helena Österlund’s Words (OOMPH! Press, 2019). He has also translated two chapbooks by Sara Tuss, Efrik: Automanias Selected Poems (Goodmorning Menagerie, 2016) and The Night’s Belly (Toad Press, 2016). His creative and critical work has appeared in Kenyon Review, Quarterly West, Yalobusha Review, DIAGRAM, Bat City Review, and Omniverse. He edits Deluge, co-manages Radioactive Cloud, and co-founded the Yumfactory Reading Series. A Princeton INCH scholar, Cunningham holds an MFA in poetry from the University of Notre Dame.

Abigail Friedel, art editor for Stillpoint Literary Magazine, is a second-year student at the University of Georgia studying art and journalism. In addition to her work at Stillpoint, she is a culture journalist for The Red and Black. Her artwork has been featured in both Stillpoint and Lamar Dodd School of Art exhibitions.

Aruni Kashyap, assistant professor of creative writing, is an Assamese writer and translator. He is the author of His Father’s Disease and Other Stories (Context/ Westland Books, 2019) and the novel The House With a Thousand Stories (Penguin Random House, 2013). He won the Charles Wallace India Trust Scholarship for Creative Writing to the University of Edinburgh in 2009, and his poetry collection, There is No Good Time for Bad News (Future Cycle Press, 2021), was a finalist for the 2018 Marsh Hawk Press Poetry Prize and 2018 Four Way Books Levis Award in Poetry. How to Tell a Story About an Insurgency, an edited short-fiction collection with a critical introduction by the editor will be published by HarperCollins in February 2020. His short stories, poems, and essays have appeared or are forthcoming in The Oxford Anthology of Writings from Northeast, The Kenyon Review, Joyland Magazine, the New York Times, The Guardian UK, the Hindu, Evergreen Review, Karthika Review, Juked, Sin Fronteras Journal , Stonecoast Review, The Atticus Review, and others.

Sherry Luo, senior editor of Stillpoint Literary Magazine, is a fourth-year student at the University of Georgia studying genetics and English. She is the author of a chapbook, Imperative of the Night (The Lune, 2017). Her work appears in Atlanta Magazine, Figroot Press, The Madras Mag, FishFood Magazine, and The Shanghai Literary Review.

Kyla Sterling joined The Georgia Review in 2018 where she serves as the marketing and circulation manager. She holds an MFA in creative writing from the University of North Carolina at Greensboro. Her chapbook, Warnings & Fables, was published by dancing girl press in 2017 and her poetry has appeared in Painted Bride Quarterly, Adroit Journal, Radar Poetry, Blackbird, Barrow Street Journal, and Notre Dame Review, among others.

Laura Theobald is a PhD student at UGA focusing on poetry and creative writing. She’s the author of the full-length collections What My Hair Says About You (Metatron, 2017) and Kokomo (Disorder Press, 2019), plus three chapbooks. She received an MFA from Louisiana State University, where she served as editor-in-chief of the New Delta Review, and has worked as an editor for a number of small press publishers, including the translation-based OOMPH! Press and BOAAT. Her poetry has appeared in jubilat, The Volta, Hobart, The Atlas Review, Everyday Genius, and Black Warrior Review, among others, and in the anthology Women of Resistancefrom O/R Books (2018).

Magdalena Zurawski, director of UGA’s Creative Writing Program, joined the English faculty in the fall of 2013. She holds a BA in comparative literature from Brown University and completed her PhD in American literature at Duke University in 2013. Her novel The Bruise was published in 2008 by FC2/University of Alabama Press. It received both a 2008 Lambda Award and the 2007 Ronald Sukenick–American Book Review Innovative Fiction Prize. Litmus Press published her poetry collection Companion Animalin 2015, which won the Norma Faber First Book Award from the Poetry Society of America. Her most recent collection, The Tiniest Muzzle Sings Songs of Freedom, came out from Wave Books in the spring of 2019.