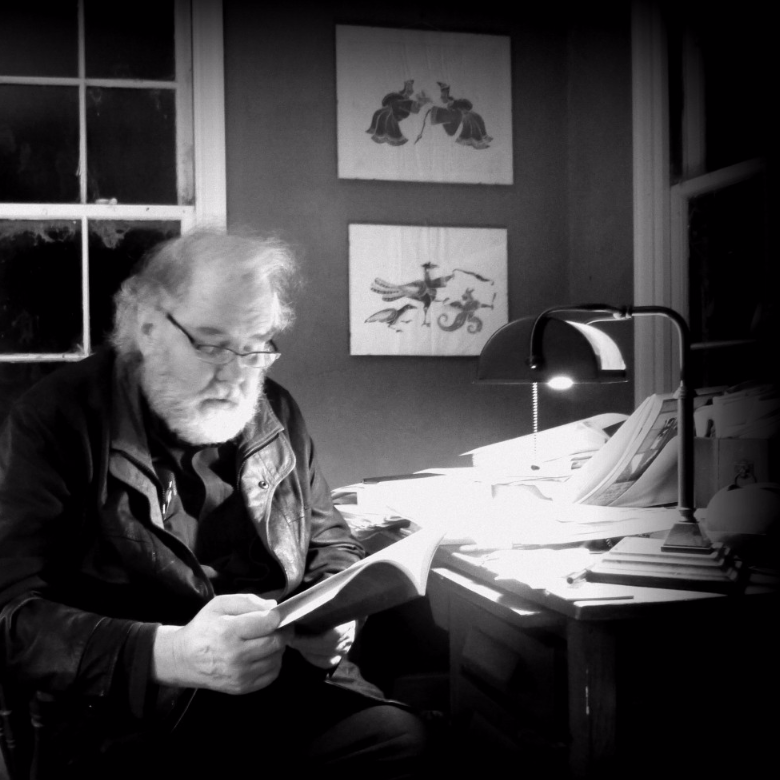 On the last evening in January 2013, I had the good fortune to stop by Coleman Barks’s home in Athens to interview him about his long poem “The VOICE inside WATER,” which appeared in the Winter 2012 issue of The Georgia Review and subsequently in his recently released collection, Hummingbird Sleep: Poems, 2009–2011 (University of Georgia Press). We sat by the fire in the spacious front room where Barks works (the fire wasn’t just for ambience; the house really was drafty), and Barks mused on the workings of the poem. Written in part as a meditation on the stroke he suffered in March 2011, it pulls together some of Barks’s eclectic enthusiasms, including rare endangered animals, esoteric color words, and the sublimely demented eighteenth-century poem Jubilate Agno by Christopher Smart.

Barks doesn’t remember what inspired him to order a copy of Jubilate Agno—though in the 1970s his friend Galway Kinnell used to recite his favorite lines from it when they did readings together—but the Oxford edition serendipitously arrived at his house twelve days after his stroke. “You see?” he said, showing me where he had written the date in his copy.

Smart’s lines on voice are eerily relevant; Barks had physically lost his own with his stroke. This loss must have been a particularly cruel reality for a poet whose exuberant, almost mystical bearing when reading aloud bonds him to his listeners. “You trance when you read,” Michael Stipe of R.E.M. once told him.

Barks began including lines from Jubilate Agno in the poem, which became a way for him to express his “love for a kind of lunatic wandering.” It provided “a sort of shelter for me,” he said, “like Christopher Smart found in Mr. Potter’s Asylum. He found a place where he could heal, along with his cat Jeoffrey, and make himself more presentable to the public again, where he liked to walk around and pray loudly and in inappropriate ways. And I like to do the same. One internal reason for the poem is to give me some place to rest and just to relax in a kind of sublime way and feel healed.”

Thankfully, Barks’s voice did return, and on that winter evening he spoke of coming to terms with his fears of death and another stroke, of his desire for a “physical theology” grounded in experience, and of the pleasure of reading Christopher Smart. He read to me some of the more bizarre passages from Jubilate Agno as well as excerpts from the haunting “The VOICE inside WATER”; the latter may offer a rare opportunity for listeners, because in one of the poem’s copious footnotes he writes that “Most likely . . . I will never bring this poem and its notes to a reading. Too long, too willful in its wandering.”

Well-known for his versions of the Persian mystic Rumi’s poetry, Barks has an affinity for the ecstatic tradition which manifests itself in his life and his work. “You can’t aspire to be an ecstatic,” he told me. “I think you just have to live it. I don’t know—you can be a fake ecstatic, I guess. Lot of that going around. . . . In its indulgences, the poem is kind of carelessly ecstatic, I think.”

Listen to the entire interview:

C. J. Bartunek received her PhD in English from the University of Georgia and her BA from the University of Southern California. Before that, she grew up in a small town in northeastern North Dakota. Her writing has appeared in The Smart Set, Pacific Standard, The Big Roundtable, and elsewhere. Prior to joining The Georgia Review’s staff in June 2018, she taught as a lecturer at Piedmont College in Demorest, GA.

“Look at the World as It Is”: An Interview with Sir Salman Rushdie

Identifying with Valentine: An Interview with Anya Silver