Though early in his career, the painter Cy Gavin is already capturing the acclaim of the art world. In 2015, while he was still in the MFA program at Columbia University, the New York Times reviewed his first solo show, comparing him with Kara Walker, Kerry James Marshall, Cézanne, and Gaugin, and concluding that the young artist possessed “good instincts and an undeniable commitment to materials.”

As an undergraduate at Carnegie Mellon University, Gavin majored in art and minored in history. These two disciplines ultimately join in his paintings, which are often informed by his research into his family’s history in Bermuda within the larger context of the trans-Atlantic slave trade and the African Diaspora, for which Bermuda—his father’s home country—was a notorious site. Gavin grew up in a small town near Pittsburgh, but after his father’s death he began making regular trips to the island. His visits to the Historical Society Museum there reinforced his sense that official narratives too often declined even to mention the horrors committed against Bermuda’s people of color. Gavin studied the island’s history, geography, botany, and culture, attempting to imagine how his ancestors and others like them might have experienced the land, “with all its exquisite beauty marred by the atrocities perpetrated by the British,” as he told W Magazine in 2016.

These hidden stories are a recurring theme reflected in paintings such as Tucker’s Point Golf Club and Cemetery. Tucker’s Point is a wealthy resort area developed after the black residents of Tucker’s Town were forcibly removed in the early 1900s; on Gavin’s canvas, lights blaze from a porticoed clubhouse in the distance, while in the foreground an inky black mass disrupts the vivid magentas and the fluorescent oranges and greens of the grounds. More closely inspected, the spreading darkness reveals the outlines of a woman with an agonized face, clutching the earth. Even seemingly straightforward landscapes are presented through the lens of historical consciousness; another work, Jeffrey’s Cave, grew from Gavin’s experience sleeping in a grotto where an escaped slave stopped while pursuing his freedom, one of the many “figures of resistance” referenced in Gavin’s work. From the cave, the nighttime sea and clouds are lovely, peaceful, and mysterious, but the vastness of the ocean that faces the viewer also evokes the enormity of the barriers between the displaced, enslaved people and their dreams of autonomy.

Still, it would be reductive to consider Gavin’s canvases merely as straightforward narrative paintings, and inaccurate to assume that suffering is the most prevalent emotion in his works. The people he depicts—always black—are beautiful, powerful, and often joyful. Though Bermuda’s past is inescapable, many of the scenes seem to take place outside of, or beyond, time: Gavin frequently presents nudes, often in landscapes without architectural or other man-made impositions that would fix the scene in a specific era. Swimming, flying, and floating figures are a prominent motif, evoking ecstasy and transcendence: in the dream-like Aubade II, enormous transparent black petals bloom around the head and shoulders of a figure flying above the waves, away from the shore. At other times, however, Gavin’s less literal works can be unsettling—as in Sea Arches, where a pair of disembodied legs, studded with silver staples, sticks out from the rocks.

The incantatory quality of many of the canvases is enhanced by their largeness, and by the lore that surrounds Gavin’s practice. He often mixes his paints with symbolic materials, from Bermuda beach-sand to his own blood, and even, famously, with some of his father’s cremains in a portrait depicting him. “I paint with my body and not my wrist,” Gavin has said, describing his often-improvisatory process.

In the stunning painting that graces this issue’s cover, Nellie DeCosta Smith, Gavin’s great-grandmother, rises goddess-like above the island and above Pembroke Cemetery, where Gavin believes she is buried. Because Bermuda kept limited official records of black citizens in the nineteenth century, even post-emancipation, Gavin’s archival research into his genealogy has been challenging; DeCosta Smith is the last ancestor he has been able to trace. Through his art, however, Gavin honors the known and unknown individuals colonialism threatened to erase.

Cy Gavin’s paintings have been exhibited at the Whitney Museum of American Art and Sargent’s Daughters in New York, the Rubell Family Collection in Miami, the VNH Gallery in Paris, and many other venues. He lives and works in New York, where he will present his next solo show at Gavin Brown’s Enterprise in March 2019. 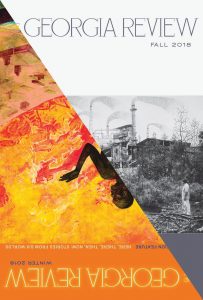 “As Complicated and Elusive as Reality”: María Berrio’s Many-Layered Collages (with an interview by C. J. Bartunek)