Marvin Bell’s recent books include Vertigo: The Living Dead Man Poems (Copper Canyon Press, 2013 )and Whiteout (Lodima Press, 2011), a collaboration with photographer Nathan Lyons. The selections from “If & When” in this issue continue Bell’s poetic correspondence with Christopher Merrill, earlier exchanges from which were collected in After the Fact: Scripts & Postscripts (White Pine Press, 2016).

Christopher Merrill has six poetry collections; many works of translation and edited volumes, among them The Forgotten Language: Contemporary Poets and Nature (1991) and From the Faraway Nearby: Georgia O’Keeffe as Icon (1993, reissued 1998); and six books of nonfiction, most recently Self-Portrait with Dogwood (Trinity University Press, 2017). His work has been translated into nearly forty languages and his honors include a knighthood in arts and letters from the French government. As director of the University of Iowa’s International Writing Program, he has undertaken cultural diplomacy missions to more than fifty countries. 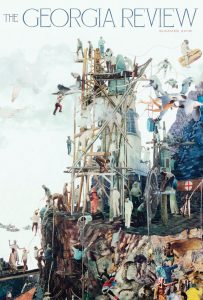