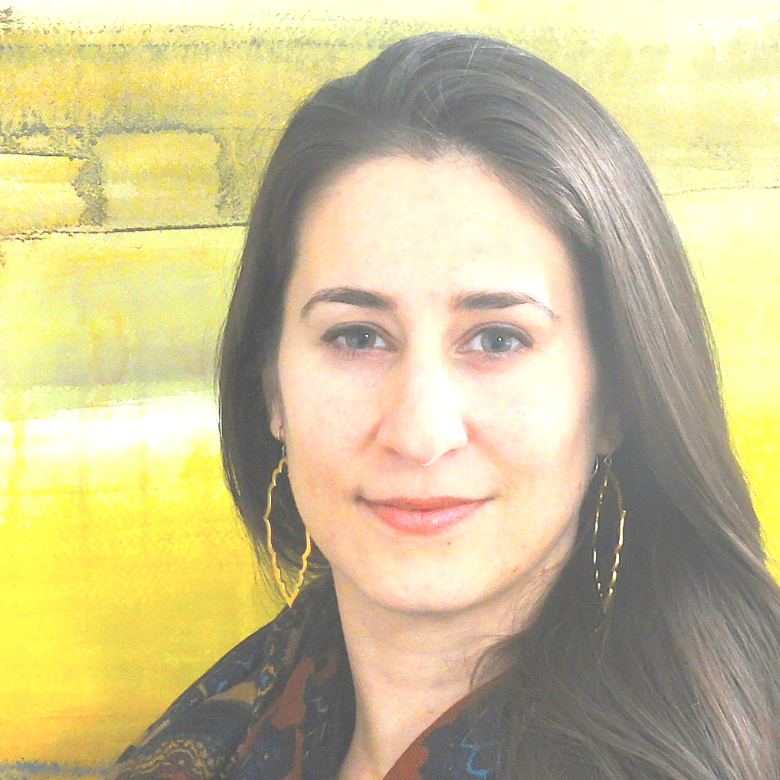 Lindsay Tigue (LT): I really enjoyed “The Stones of Sorrow Lake,” and was impressed by the story’s central idea—how in Jackson’s hometown everyone’s first great sorrow becomes literally visible in the form of stones and then scars. This idea makes wonderfully resonant both the physical weight of grief as well as the lingering effects of sorrow. The very visibility of past sorrows seem to trap these characters, but it also unites them in that it encourages a constant sharing of each other’s stories. Are these characters more trapped in their hardships than outsiders such as the narrator? Or do you understand the townspeople as trapped as anyone and everyone who experiences true grief?

Brenda Peynado (BP): Thanks so much for your questions!

I started this story as an exploration of a real town I moved to. It was such a small town that I was constantly being told everyone else’s stories, their tragedies, their joys. Even if a tragedy had happened twenty years before, it seemed like they all remembered and were steeped in its lore. Even the young people seemed to have a hard time escaping those stories. I met someone who was stuck in his life in part because he was stuck in the narrative of his own tragedy. And people who left, upon returning, had to negotiate with the person they had been years before because that’s how everyone remembered them. All of this impressed me because I’m someone who has moved nearly every year of my life since I was sixteen, and in every new place, I can reinvent myself. No one knows my tragedies or my past selves. But I was also somewhat envious of this community, and I wanted to have that kind of anchor, to be steeped in the stories about those close to me.

I definitely think that grief, even individual grief, can feel tangible, heavy, inescapable. In this story, though, I wanted to explore the way individual grief can be stitched onto us by the remembrances of others, how it can become a communal sorrow, and the relish that people take in wrapping themselves in the shroud of others’ misfortunes. In that town, part of the ritual was a one-ups-manship to who could tell the most tragic story. The phenomenon is not necessarily particular to small towns; my relatives in Santo Domingo tell tragic stories in similar webs. But I do think that kind of grief requires being rooted in a place—having a long memory and physical reminders that trigger you into the past. The stones of Sorrow Lake function in a similar way, as physical reminders that weave the community together and keep them grieving for each other.

LT: I particularly admired the way you framed the central difference between the narrator and Jackson as a battle between seriousness and “lightness.” Jackson, who has grown up in a place where sorrow is so pervasively present, cannot play and joke as the narrator does. She even says Jackson reacted to her “like somehow [her] lightness was an insult.” Can you talk a little bit about this dynamic?

BP: This may have leaked in as one of my own struggles. I don’t have a very good sense of humor, and in writing humor seems best used when trying to get at something deeper or to prepare the way to slam the reader with something tragic. On the other hand, with people close to me, I am pretty goofy. One of the things that I love about my partner is that we laugh together so much. If I’m not in a great place mentally, he can joke me out of it. But why devote our time to laughter, why Facebook-share that cat meme, when there are so many ills in the world? I don’t know—what is laughter’s best use? I don’t think Jackson has it right. He seems so adverse to all laughter and playfulness, and he’s so entranced by his sorrow he can’t find his way out of it. I didn’t want the narrator to traverse a character arc from laughing to not laughing, as I think laughter is so crucial to life. The narrator’s laughter isn’t “light”—it’s a different kind of laughter. She acknowledges full well the weight of tragedy there is in the world and decides to laugh anyway.

LT: On your author website, you describe how someone called your in-progress story collection a “magical mystery tour.” You describe some of the stories, including: “A group of radioactive truck drivers storm the U.S. border. A couple takes a cruise to the Caribbean only to find that not everything is what it seems. Travelers get stuck in a traffic jam that lasts a thousand years.” In another interview you did with Mid-American Review, you described your writing as “magical realism.” What draws you to the magically real?

BP: The writing I love is driven by wonder, seeing the world anew in some arresting way. We get to wonder by defamiliarization, coming at the world sideways, and one way to do that is through fabulism and magical realism. Often the stories that excite me the most are fabulist in some way, concerned with the dramatic, the strikingly visual, the grand myths of humanity. My favorite writers are Isabel Allende and Salman Rushdie, and every time I write I think of them.

Even something like Denis Johnson’s Jesus’ Son, though he’s normally considered a realist, strikes a similar chord in me by pairing the small grittiness of a discarded life with the beauty of the grandiose and the mythic. Stories that stay small have never called to me for some reason, perhaps because growing up I was instead surrounded by relatives’ stories of the Dominican Republic featuring dramatic deaths, civil war and invasions, dictators, women betrothed against their will, and religious mysticism.

However, I used to write quiet realism because I thought that was “literary,” and I also had any sense of the mythic and grand beaten out of me by a few teachers, sadly. It wasn’t until after my MFA that I stopped thinking about writing toward workshop and just let loose. For a time I was working a few minimum wage jobs back-to-back, completely miserably, and often the only way I could find time to write was to lock myself in the bathroom and write on my phone with my thumbs for a few minutes. So it was imperative to me to write what I loved, or I would just never write. It turned out that I really enjoy magical premises. Getting them right is work, of course, but my feeling of joy and wonder when one of my characters sprouts wings, or in this case, sorrows, makes me feel like I am having fun when I write. I love what I do.

Every good story, be it fabulist or realist, builds its own particular world. But the point should never be whether or not we can recognize our own personal world in a story. (In fact, the insistence on what can be recognizable as “reality” at the expense of world-building often leads the workshop to fail people of color, by indicating that their stories “aren’t realistic” when they don’t fit the majority perspective or conform to assumptions.) The point is to imagine ourselves wherever “there” is and then bring the lessons learned back. Sometimes the only way writers can get at something is sideways (or backward, or forward). Politics, tiredness, or our own experiences can prevent us from seeing straight.

LT: Each of your stories seem to have a compelling idea at its core. Do you start your stories this way, with such an idea? Or do you begin with character, or image? Thinking about this, can you expand a little more on how you got the idea to write “The Stones of Sorrow Lake”?

BP: It depends on the story. This one is based on a town I lived in—the one I mentioned earlier— for a few summers with a then-boyfriend, a town that really left its imprint on me because life there felt so different than the suburban nothing-stays-for-long Floridian childhood I had. I actually started this story as a pretty realistic one, a whopping 38-pager about the first months of a woman who moves to an upstate New York town and tries to fit in while working at a marina restaurant. The story was all over the place and had about four different subplots including someone stealing money from the cash drawer, a landlord that keeps drunkenly stumbling into her house in the middle of the night, and a disgraced cook that shoots a rabid fox. There were even flashbacks into her job before she moved, waitressing in the Disney Magic Kingdom.

I scrapped all of it except the idea of a young woman moving to this town full of tragedies everyone knew, and the ending image that I really liked, of her and the boyfriend atop a broken boat in the barn. I stuck with the welcome party as a way of keeping the story in control. That version was pretty realist too, but other than a scene with a few drunken vets telling her every misery about the town, I didn’t really know where the energy was or what would make the couple realize that they were never going to work out. Every time I went back to the story, I was hitting a brick wall.

Then one day I was daydreaming in the hammock on my porch, and I remembered the stones on the Lake Ontario shore. I had never seen a shore of rocks before living there, and it was such a big part of our lives. Every second we could be outside, we went to the lake. Somehow, the visual image of those stones and that town of sorrows joined forces, and the rest of the story fell into place.

In general, whether the story is fabulist or realist, things like image and character I file away in a notebook. I can’t do anything with just those pieces, and even if I try to start writing, I find myself at a loss for how to go forward. So I let them stew, and months, sometimes years later, I find the story. Then I can begin. By “story,” I don’t exclusively mean plot; I mean some combination of plot and theme that is the external story married to the emotional journey. Strong conceits can often deliver both at the same time, because the physical magic can be an externalization of a character’s depths. Conceits often give me the backbone of a story, and then I can spend my time rolling in character and image—like knowing I’m on a moving train I don’t have to drive, so I can look out the window at the landscape.

Lindsay Tigue won the Iowa Poetry Prize for her first book, System of Ghosts (University of Iowa Press, 2016). She writes poetry and prose and her work appears in Prairie Schooner, Indiana Review, Hayden’s Ferry Review, and elsewhere. Tigue, a Sewanee Writers’ Conference scholar and Vermont Studio Center fellow, holds an MFA from Iowa State University and is currently a PhD student in creative writing at the University of Georgia.

The World Has to Fall Away: An Interview with Rita Dove