Once in a while I gave up, and let myself

remember how much I’d liked the way my ex’s

hips were set, the head of the femur which

rode, not shallow, not deep, in the socket

of the pelvis, wrapped in the iliofemoral and

the ball bearings suspended just so

to give him that walk. Wooden yokes, in

was authentic, it was from another place, it was

systemic. I idolized it without

reserve, caution, or limit, I loved it with an

a year later, I still dreamed it

sometimes, the illusion of a constellation

visible only from the earth’s vantage,

the glittering peaks of his iliac crest:

down, bright winching bitings, I even

the curve of that posterior, cool

Sharon Olds is the author of eleven volumes of poetry, most recently Stag’s Leap (Knopf, 2012), which was awarded the T. S. Eliot Prize and the 2013 Pulitzer Prize for Poetry. Her next collection, Odes, is due out shortly, also from Knopf. Named New York State Poet Laureate from 1998–2000, Olds teaches in the Graduate Creative Writing Program at New York University and is one of the founders of NYU’s writing workshops for residents of Goldwater Hospital and for veterans who served in Iraq and Afghanistan. A Chancellor of the Academy of American Poets and a member of the American Academy of Arts and Science, she was awarded the Donald Hall–Jane Kenyon Prize in American Poetry in 2014, and was elected a member of the American Academy of Arts and Letters in 2015. 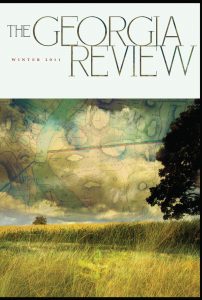 We Are All of Us Passing Through

Metamorphosis: From Light Verse to the Poetry of Witness