If the trout died it would not be

as motionless as it is now,

in a current a man cannot

stand in and under which looser

stones go tumbling from their sockets.

Across its back it seems sunlight

is what’s swimming, and still the trout

is still, not the least fin flick or

tail motion, but a curve of meat

held in the river’s swift rushing.

Only then the skwala stonefly

drifts above it and, unbending,

and slurps the fly from the surface,

then sinks back down to where it was,

resuming its stillness, too deep

for even the spring’s last eagles,

and believing, if it sees me

at all, that I must be no more

than a tree or a tree’s shadow.

on such an afternoon as this,

when the river has lost its ice

and the first fat terrestrials

feed, after the long dark winter.

And this is how it is I am—

moving more slowly than I can—

in perfect position to cast

of the sort of bug just eaten,

exactly as the real thing had

moments or even years ago,

I made my way to where I am,

and concentrated, and did not

give myself away, but waited,

just as I am waiting right now.

For the fierceness of the long fight,

the netting and admiration,

gratitude, and the quick release;

a gentle holding of the trout

in the wash of a hard current,

as it recovers and bolts off.

Forgive me, we are not there yet.

Even now the fly in its drift

has not yet entered the trout’s ken.

It is moving as shadows move.

Its motion is planetary.

This day’s same sun will set and rise

a million times or more before

what is is permitted to be.

at his own sweet will, as does time,

which I am in charge of just now,

as otherwise I never am.

Robert Wrigley, Distinguished Professor Emeritus at the University of Idaho, lives in the high-mountain woods near Moscow. His eleventh and most recent book of poems is Box (Penguin, 2017). 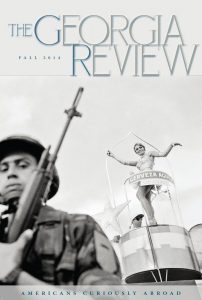 The One I Get and Other Artifacts