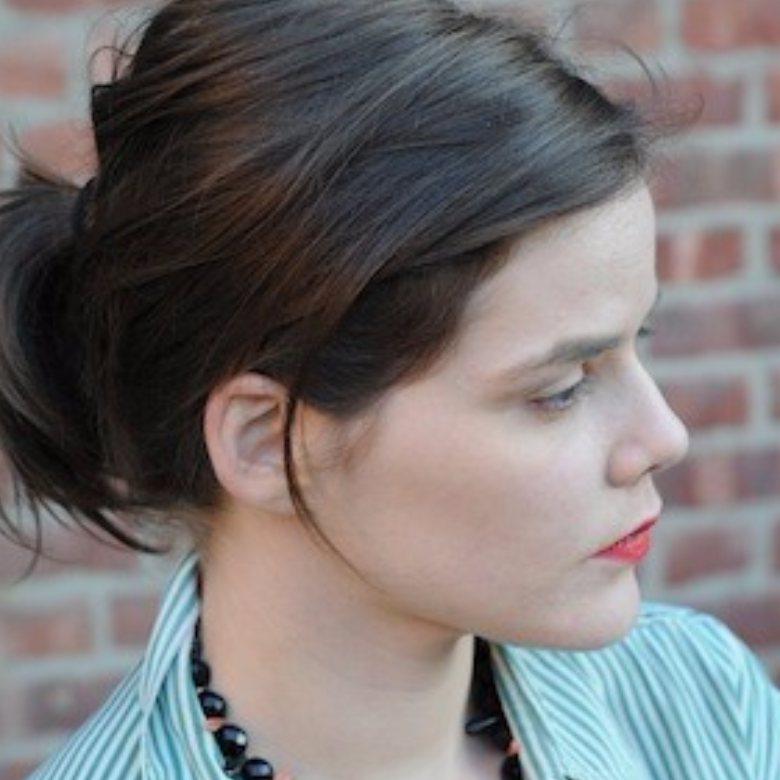 Laura Solomon: I find your mark-making deeply expressive and uniquely unpredictable—at times even messy—and yet simultaneously highly economic—sometimes, with regard to your approach to figures, a bit like Egon Schiele’s. In my introduction to We Dust the Walls, I talk about your allusions to Italian Renaissance painters, but I also noticed that what I see might be in conversation with a number of other artists. I know elsewhere you’ve discussed poetry-comic and comic book influences, but I wonder too about your “art history” affiliations.

Bianca Stone: I was always surrounded by a certain art history in my house. My mother’s family had a very particular aesthetic that they each cultivated very closely. And I curated things for myself too: Van Gogh, Egon Schiele, El Greco of Toledo (!), Max Ernst, Max Beckmann, Lucian Freud, Marc Chagall—all those amazing men. There’s something very similar in their work. A kind of malformed, moving human. An obsession with hands. The woman in that history is Frida Kahlo. I love how her work puts forward an image of self that is surreal, strange. Her presentation of self is like the “I” of a poem. One’s self, but not one’s self. There’s something existentially at stake in her paintings—a deep, continuous investigation into the self’s surface.

When I was growing up, the Renaissance reigned in my house, and I have always been a big reader of Renaissance plays—Shakespeare and Marlowe and Jonson. What draws me to the visual images of that time is their symbolism, the frozen emotion, the flatness of some of the bodies, how they don’t look quite right. I think I like “scenes,” those dramatic moments of poised action. When I first moved to New York City, I would go to the Met and sit in the Renaissance wing for hours, and I realized that much of the artwork was presented in panels like in a comic book: telling a story in divided sections, moving linearly.

LS: Everything you’ve just said fascinates me—I feel torn to take us in at least three directions. How did I miss the spirit of Frida Kahlo at work in your images? I want to come back to a discussion of self-representation and the representation of self-representation in the age of social media. I also want to discuss further the various inheritances at play in your work and the particular weight We Dust the Walls places on that subject matter, whether directly or obliquely, both in the image and the text. 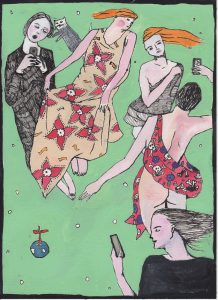 But first I want to address the power of flatness in the images in We Dust the Walls and in early Renaissance painting. When I first saw your poetry comic, it reminded me of Piero della Francesca’s series of frescoes in Arezzo, The Legend of the True Cross, especially the battle scene he depicts in one of the larger panels. The image is realistic—you can see every leg of every horse and an emotional expression specific to each face—but something is indisputably off about its realism. The flat depiction reinforces a dreaminess that arises from the image witnessing more in a moment than any eye could ever naturally behold. We can’t stop time, but the image can and does so that we can see what we’re missing, which turns out to be almost everything—and therein lies its ability to leave us awestruck. Angelic Texting, the image on our Spring 2015 cover, produces a similar feeling in me. When I look at it, I feel as though it presents something radically holy about contemporary life that I’ve never before noticed.

So maybe there is, after all, a single concern common to the various conversations I would like to have with you—I think what I’m really curious about are the ways in which your work describes, enacts, and responds to time.

BS: The movement of time becomes more abstract in creative work because the creator is dictating the rules. And how powerful a thing that is: to dictate time. It’s like reading about the complex nature of the universe: once an astrophysicist begins explaining things, we realize that the rules in space are very different than those we seem to experience on earth. Sometimes we simply cannot comprehend the rules at all; our tiny idea of time is just a means of convenience, and I think art resists convenience. Once we lessen our grip on learned patterns of conceptualizing time, we start to see more around us.

Poetry offers a good opportunity to depart from routine temporal encounters and perceptions. A poem is very brief compared to most prose works. And yet, the poem demands a much slower approach . . . but not too slow.

Robert Pinsky says “the medium of poetry is a human body.” A poem’s meter is based on the body’s music, which—rooted in breathing and the sounds manipulated by means of our larynxes and our mouths—subconsciously dictates the pace at which the poem’s read. And poetry comics should be imbued with that same unique, physical musicality.

Moreover, comics are defined by what’s called sequential imaging. We see the comic as moving forward, telling a story, driving us to the end, but the poetry comic form can demand you to stop and inspect the intricacies of the image, while also taking in the meaning of the words. In other words, you’re being both propelled forward and stalled simultaneously. Discussing time reminds me of what John Keats famously called “negative capability,” how, as writers and readers of literature, we have to be capable of embracing uncertainty; there has to be mystery, things that are missing. In a poetry comic, there are so many things missing. You have the white space on the page, the “gutters,” as well as the subsequent connections our minds will make while seeing the image and reading the text—so much happens in those small spaces that demands time slow down.

All of this happens very subtly, powerfully. In experiencing art you might be taking in a lot of information, trying to make sense of it, but while doing so there is room for awe and curiosity.

LS: Two words strike me as particularly resonant in your above response—gutters and room (“room for awe and curiosity”)—as they introduce another motif at the crux of your work; We Dust the Walls seems to draw much attention to and inspiration from physical spaces (both exteriors and interiors). What is “house” and what is “human” are inextricably intertwined and take on various combinations, which are rendered especially conspicuous in the visual images. I wonder if you could speak a little about the relationship between bodies and buildings in We Dust the Walls.

BS: I like to think of houses as exterior versions of the interiors of the people living in them. When I think of the houses I grew up in—my mother’s and my grandmother’s—I think of them as living things. I get physically upset thinking about a house that isn’t lived in.

Houses were very important to the women who raised me and who relied on owning their own houses because life was fickle and unpredictable. Because the women in my family often lacked stability, their houses became the constant, the husband, their place of employment. The houses were dusty, too. Lots of antiques and old things. Lots of clutter like an old trinket shop. And books everywhere, art all over the walls, wallpaper under the art, and Iranian carpets.

I think of a house as a burden, too. You can be carrying a house around inside you. You can be stuck with a house in you, and that can be suffocating when probably in all of us there is also a nomad.

There’s a Slavic folktale about this witch Baba Yaga, who lives deep in the woods in a house with chicken feet. She’s an ambiguous character, neither good nor evil. But she’s intense and powerful. Maybe there’s something witchy in my relationship with the house. I’m hanging all my dried herbs around me, I need my things. That’s how I was raised—in old houses filled with witchy things and powerful, lonesome women whose houses were their protectors and confidantes. That’s what I’m drawing—the house as both the significant other and the self. 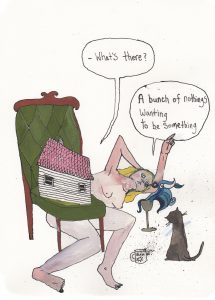 LS: Maybe it’s time then to return to Frida Kahlo and to some of the questions I wanted to discuss earlier—if “the house is both the significant other and the self,” I wonder, considering all you’ve said thus far, to what extent a self-portrait is always in part the portrait of another? And what might all of this mean today in the age of social media and the culture of ceaseless self-representation that accompanies it? What is at stake when we encounter self-representation in artworks today, or what is at stake for you as an artist?

BS: We’re continuously up against our ideas of self. The small self: that self in the mirror, that self in the selfie—who is that? That’s not actually me, is it? That small self is a delusion that has little to do with my true, quiet core. I think I react impulsively to that duality in my art, the schism within the self.

One night I was thinking to myself: my god, the Internet is a poetry comic.

It’s constantly responding and moving forward while remaining static inside boxes of text and image. It’s a conversation without sound. It’s filled with white space, use of page, non sequiturs. It’s composed of these little circles and squares, 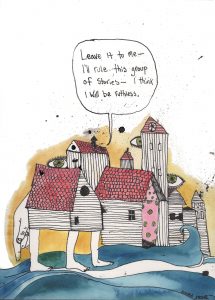 images of yourself and other people.

As artists we should remain constantly curious and investigative when it comes to our everyday façade and patterns. I’m baffled when students are ashamed to “talk about the I” in their poems; they think they will be “confessional” if they do that. I ask them: who is writing this poem, then? Is your experience one that must be as inoffensive as elevator music? If we can’t be introspective then we can’t give back to the world. But we must also avoid the small self, the petty surface; we must see the veneer for what it is and access something more strange and true underneath. We need to try harder, all the time. Continuously try to grow more adept at exploring the human mind and how it fits into the world around it. The principle of “survival of the fittest” doesn’t necessarily oblige you to be in good shape, but it does oblige you to see how everything fits around you and where you play a part. Once you stop trying to be other people and start to explore your own capabilities, fitting them into the world around you, that’s when evolution happens.

Laura Solomon, public outreach and digital projects manager at The Georgia Review, is currently co-executive director at the Woodland Pattern Book Center in Milwaukee. She holds an MFA in creative writing from the University of Massachusetts–Amherst and is the author of three books of poetry, most recently The Hermit (Ugly Duckling Presse, 2011).

Divided in So Many Ways: A Discussion with Karen Hays