In Terry Rowlett’s “Breaking Ground,” a pair of earthy do-it-yourselfers stake a claim to their own little patch of the promised land; seven pages later, the artist’s “American in Paradise” pauses in his grand tour across a pastoral Old World landscape to pose amid the debris he’s strewn. In these and eight other oil paintings featured in this issue, Rowlett’s contemporary archetypes—hunter-gatherers, interlopers, and would-be saints—dominate the physical environment, even when their intentions seem to be nothing more than to live peaceably on the land.

Ten years ago, when Rowlett’s work first appeared in The Georgia Review (Fall 1999), religious themes and questions prevailed in his portfolio “Images of Faith.” These days the artist’s canvases are decidedly secular, although his characteristic style persists: everyday folk in classical settings and poses surrounded by twenty-first century Americana. Thus, foxhounds sniff their way toward a hipster couple astride a chopper, and the wise man consulted by a Birkenstock-wearing Eve is himself shod in blue flip-flops. Rowlett remains keen on the mystical figure of the seeker and images of quest, but his vivid allegorical scenes now seem focused on the worldly mysteries and tensions that complicate relationships among people and between the human and natural worlds.

Rowlett’s work has been exhibited recently at Ciné BarCaféCinéma in Athens, Georgia, Jenkins Johnson Gallery in New York, and Zeitgeist Gallery in Nashville, as well as the Morris Museum of Art in Augusta, Georgia, and the Fay Gold Gallery in Atlanta. His images have also appeared in numerous other publications, most recently as an accompaniment to Robert Coover’s short story “White-Bread Jesus” in the December 2008 issue of Harper’s—Rowlett’s fourth appearance in that magazine—and on CD covers, including Vic Chesnutt’s 2008 Dark Developments.

Rowlett, born and reared in Arkansas’ Ozark country, earned his MFA in painting and drawing from the University of Georgia in 1995 and remained in Athens until 2003, when he embarked on a four-year sojourn that took him to live, paint, ponder, and teach in Nova Scotia, Brooklyn, the Hudson River Valley, Nashville, and Cortona, Italy. In 2007 he returned to Athens, where he lives and works in an eco-community outside of town. 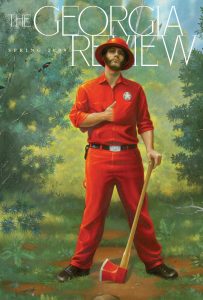