Alice Walker (b. 1944) has produced a large body of work that includes poetry, essays, and fiction, perhaps most notably her classic novel The Color Purple (1982), which won both the Pulitzer Prize and the National Book Award, and the influential critical text In Search of Our Mothers’ Gardens: Womanist Prose (1983). Her most recent books include Overcoming Speechlessness: A Poet Encounters the Horror in Rwanda, Eastern Congo, and Palestine / Israel (2010); Hard Times Require Furious Dancing: New Poems (2010); and The Chicken Chronicles: Sitting with the Angels Who Have Returned with My Memories: Glorious, Rufus, Gertrude Stein, Splendor, Hortensia, Agnes of God, The Gladyses, & Babe: A Memoir (The New Press, 2011). Born in Eatonton, Walker became active in the civil rights and feminist movements as a young woman, and these passions informed her artistic path throughout her career, as she has continued her activism for social and environmental justice. She is also known for championing the work of other writers: her anthology I Love Myself When I Am Laughing . . . and Then Again When I Am Looking Mean and Impressive: A Zora Neale Hurston Reader (1979) helped bring Hurston’s books back into print and prompted a revaluation of her career. Walker currently lives in Mendocino, California. (Inducted in 2001) 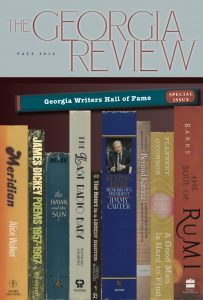