Discussing her creative process in a recent interview with Brandon Lussier for the California Journal of Poetics, poet and artist Bianca Stone posits: “There’s a power in not asking what something means, the irony being that the question becomes relevant only once you stop asking it. And also perhaps, in some ways, answered.”

Stone’s stance on practice and interrogation is reiterated in We Dust the Walls, a highly charged, lyrical narrative executed primarily in pen, ink, watercolor, and gouache. Consider, for example, the ambiguities that surface from the opening two panels’ meditation on intimacy and vulnerability: in the first, two large eyes directly intercept and lock with the viewer’s across what could read as a face or body made of house—its human legs treading the innocuous waves below, from which a tiny cocktail and a cigarette-smoking liquor bottle are comically pitched. Within the house, however, lurk further faces, smaller, semi-obscured, and more guarded. These three “inner-countenances” peek out onto the larger world of the image, extending it with their gazes while simultaneously constituting with their presence a regression of deeper and presumably darker interiors, both spatial and psychological. This multivalence is perhaps most apparent when taking into account the petite mien in the upstairs window, which altogether averts our stare in favor of contemplating something we cannot see—whether located beyond the frame or buried more introspectively within it. To the right, a banner reads: “Now we can begin.” “In the boudoir,” rejoins the scroll that immediately follows, “in the hall, back / to the ocean / that tastes like / an old-fashioned—”

On the next page, the compositional harmony between house and human capsizes, ransacked by a now darkened, nearly vertical wave, strikingly severed from its ocean—an especially resonant choice given Stone’s aqueous medium. Dull, deadened eyes, no longer gazing outward or inward, flake off from the roof, while the two remaining windows of the revised structure also appear dim and vacant. Intimacy as previously established—as a vast, animate continuum stretching beyond and within the subject—is pictorially flattened, swept away, and replaced by a wreckage of lifeless disassociation. “Bittersweet, the grey-faced world / more than half-hidden by it and above / the black, twisted stars” seem to blame.

Or was this corporeal maelstrom caused by “the ocean / that tastes like / an old fashioned”? Did the temperament of that withdrawn creature in the attic give rise to the destruction? In We Dust the Walls, quandaries speak, if permitted to linger, in voices more compelling than the questions to which they may initially point: Is this “poetry comic” primarily a work of visual or of literary art? Are we viewing an anthropomorphized house or a human being ensnared by her own home? Such queries become revitalized, Stone would argue, precisely when set aside, and the work does set them aside. As one digests We Dust the Walls, questions raised by examining an individual panel must be suppressed in order to encounter the panel that follows. Through an ongoing postponement and redirection of inquiries, the work propels the viewer, page by page, into deepening realms of reflection. Here, then, is Stone’s intention revealed—to offer us the opportunity to feel “the power in not asking what something means,” to let the question become “relevant only once you stop asking it.”

What results over the course of the work is a sort of fermentation of the interrogative process that mimics the rich, nonlinear nature of life as it is experienced. This temporal loosening also emerges in the issue’s front-cover image, the purely illustrative Angelic Texting. Suspended in a mint-green astral ether, celestial figures assume classical postures while taking photos with cell phones of one another and of themselves. Although the image may first strike us as humorous, its nod to Renaissance art seems in earnest. Unfazed by our glance, the figures earn their timeless depiction not in spite of but because of their absolute engrossment with the here and now.

On a related note, Stone’s term for her form, poetry comics, may conceal important ties while amplifying others, drawing specific focus to her work’s affiliation with twentieth-century precursors—such as the poetically-inclined graphic novels of Chris Ware, and especially the work of second-generation New York School poet and artist Joe Brainard. At the same time, Stone’s “comics” designation pushes us away from its apparent navigation of thoughts on earlier art history. Yet in her motifs—as witnessed in Angelic Texting, or as seen in her blending of the architectural and the human in We Dust the Walls—as well as in her use of pictorial space, gestural treatment of the figure, and an episodic approach to visual storytelling, Stone’s style proves particularly conversant with Italian fresco painting. And, as a fresco painter makes use of three-dimensional space to govern our gradual assimilation of a story, Stone controls the pace at which we encounter narrative by using page as frame, and frame as page. Perhaps most importantly, Stone’s work avoids nostalgia: rather, its engagement with the past is incidental to its being present. To “dust the walls,” then, remains an act of the living.

Bianca Stone, a poet and visual artist, is the author of Poetry Comics from the Book of Hours (LSU Press, 2016) and Someone Else’s Wedding Vows (Tin House, 2014), and she was artist/collaborator on a special illustrated edition of Anne Carson’s Antigonick (New Directions, 2015). She runs the Ruth Stone Foundation and Monk Books with her husband, the poet Ben Pease, in Vermont and Brooklyn. 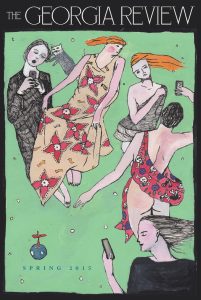 A Fight for Remembrance