The white peaches announce themselves on the kitchen counter,

the clean-edged note almost mineral, so unlike

the vague, pulpy yellow of girlhood:

the backyard peach tree bowed down with too much

the August before fifth grade a branch split

and had to be tied with a rope like a sling.

The girl next door, whose brothers hid dirty magazines

under her mattress, would sit swinging on the rope

even though my mother had said No.

I’d squint up through the rotting yellow glare

heavy with sugar ripening, heady with not telling.

Sometimes she kicked at me to Go away! or stayed there

past dinnertime, until her mother hollered across the fence.

When she skinned her knee coming down, we watched

together the blood bloom a hundred tiny points

My family moved away that winter and she wrote to me

once, about her twelfth birthday party, and once more,

years later, to say that she was better.

And perhaps because I hadn’t known that she had

not been well, because all that time I’ d understood

nothing of her wounds, her reckless swearing and

wishing as I do for her, too late,

Kyoko Uchida’s poetry, prose, and translations have appeared in The Georgia Review, Manoa, North American Review, Prairie Schooner, and other journals on three continents; her poetry collection Elsewhere was published by Texas Tech University Press in 2012. Uchida works for a nonprofit organization in New York City. 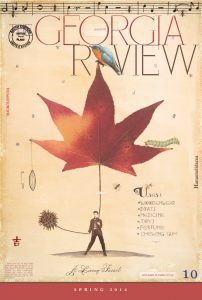